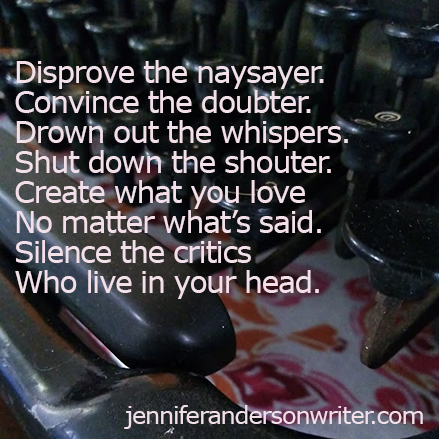 Let’s silence the voices in our head.

Okay, hopefully we’re not hearing real voices. I’m talking about those subtle voices. The fearful, doubting, negative words, perhaps once spoken to us and about us, that we still carry around.

I had a conversation with a woman who had been divorced for over twenty years. She sat there crying, talking about the awful things her ex had once said to her. He had wounded her, and shame on him for that. But it occurred to me that he said those things two decades ago, and yet she still allowed them to have power over her. She was the one who repeated them, who let them echo in her head, dragging her down.

I had someone who meant a lot to me, who tended to be critical. She has since passed away, and I miss her greatly. However, I sometimes wonder if I would have written my novel if she was still around. I have to admit her negativity was a weight on me.

Here’s the thing though. I know that her critical nature was not because of who I am, but because of who she was. So allowing her words to stifle me… is on me. She wasn’t the one who held me back. I was. I was the one who let her voice – my perception of her voice – echo in my head. I was the one who anticipated her negativity… and adopted it. She may have planted the seed – quite unintentionally – but I gave it room to grow, watered it, nurtured it.  Her words would have been buried long ago if I hadn’t given them fertile soil to blossom into something they were never intended to be. I did that. Not her.

Now I’m not beating myself up about this, and I don’t expect you to either. What I’m saying is we all need to examine those voices – the fears, the doubts, the criticism — and understand where they come from. And then choose to release them. Or bury them. Or whatever metaphor you want to use. Let’s silence them. In their place, let’s put our voice. Our true voice. The voice that has something to say and wondrous things to create.

Disprove the naysayer. Convince the doubter.
Drown out the whispers. Shut down the shouter.
Create what you love, no matter what’s said.
Silence the critics who live in your head.