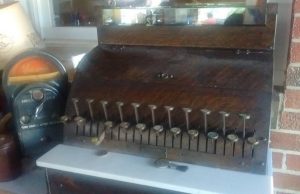 Stuff. When we were clearing out my parents’ house, filled not only with 70 years of their stuff but also with stuff from my grandparents, and their parents, I had a hard time letting go. Because stuff isn’t always just stuff. It’s memories.

My house is now jam-packed with memories in the form of old furniture, beautiful glassware, and the odds & ends that my family touched, used, and cherished. Family no longer with me, except in the form of their stuff. My poor husband, who is not nearly as into stuff, is a bit overwhelmed by my collections. I understand that but I can only hope he understands that somehow holding on to everyone’s stuff helps me to hold on to them.

Last week, a building was torn down in my hometown that once housed my father’s shoe repair shop. It had burned last fall and needed to come down. Oh, how I remember the smells of that place. Forget English Pear and Freesia, if someone made a candle that smelled like leather and shoe dye, I’d light it every day. Reeder’s Shoe Shop in Eldorado, Illinois had belonged to my grandmother and her father before her. Dad ran it for several decades but had closed it down years ago after he had a stroke. Since then, the building had changed drastically. Long gone were the stacks of never-claimed shoes, the old sewing machine that could stitch through anything, the table loaded down with scraps of leather, and the long bank of sanders that shaped rubber soles and created the fine dust that covered everything in the store with a layer of black grime. The shoes had been tossed. The dust had been cleaned. The smells had evaporated. But the building still stood, holding onto the memories.

Until now. So I sit here crying. Not for a building. Not really. Not even for stuff. But for the family whose voices I still hear, whose hands I still feel when I touch their stuff.