I learned the lesson when my husband was in law school. But I do admit that I have to relearn it from time to time.

When my husband and I got married, he had two children from a previous marriage who lived with their mother outside of Nashville. I had a house in Nashville, and a decent job. Plus, Nashville was where we wanted to live.

But, he had a dream of going back to school, and he was accepted to the University of Memphis Law School. So less than a year after we married, he moved in with his parents in Millington, TN, (north of Memphis) while I remained in Nashville.

As you can imagine, it was not ideal. We saw each other during the summer, and on weekends, every other of those with two hyper boys in the mix. We really hadn’t even had the chance to figure out how to live with each other, much less not live with each other and still remain close. Fights lasted weeks. Communication was by phone, which we neither one really care to use. My stepkids were challenging. I spent a lot of those three years telling myself I just had to hang on until he graduated and came home.

And then he did. And it was “better”. But it wasn’t “all better”. In between learning how to live with each other again, one of his sons moved in with us. Mike had the stress of studying for the bar and then launching his own practice. It was better having him close, but life did not suddenly become easy. And it was then that I learned the lesson.

I wished away three years of my life instead of appreciating what I had.

I had wished away three years of my life instead of appreciating what I had. When I drove to Millington to spend the weekend with Mike, without the kids, it was almost like we were dating again. We went out to eat. We might catch a movie. I didn’t feel obligated to clean his parents’ house (though I did sometimes.) When he came home and his son moved in with us, we struggled for money and the demands of work and launching a business and dealing with an aging house were often overwhelming. I found myself longing for those weekends spent in Millington when times were “simpler”. Go figure.

So that was my lesson. We shouldn’t wish away time. We shouldn’t think that when this thing happens or this point is reached, then we can start living. Because, this is life. Every second of it. We don’t get time back. And what we are longing for more than likely won’t be all that we think it will be. When we look back, we’ll realize we failed to appreciate the moments we let slip by.

In this pandemic, time is weird. Of course, we all long to feel normal again. Of course, we want to get back to socializing, to shopping, to eating out. To getting on with things. But… this is life too. These months are a part of our allotted time on this earth. Let’s find the good in them — the time to ourselves, the chance to slow down, the time to reflect and ask ourselves the big questions. Let’s not wish away time. 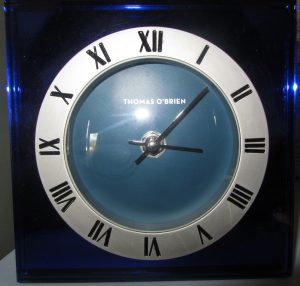 March 11, 2018 — It’s pretty odd, when you think about it. Don’t get me wrong. I love Daylight Savings Time. Tonight my “day” will feel longer because it will still be light out at a time when it was already dark yesterday. That makes my world brighter, especially since I am more of a night person than a morning person. But think about it. The entire country (or most of it) was on board for: “Okay, everyone, on the count of three, let’s shift time!” And we all agreed that 2 a.m. became 3 a.m. And when our bodies told us to wake up, it was already an hour later. And we carry forward from there. It’s honestly pretty absurd. But, it’s what we humans do. We adjust our world. Instead of simply adapting, we manipulate it. We mold it to better suit us. And why not? The clock is a human construct. The rest of the animal kingdom rises and eats and sleeps to the whirling of the earth around the sun. We alone created a way to wrangle time for consistency sake. We as communities mutually agree on things like working hours and entertainment hours and eating hours and sleeping hours. We have molded time to suit our needs. So, why not agree to change it by one hour every spring because it suits our purposes? I know some complain about it. I know a few states cross their arms and refuse to participate. Me? Even though I “lost” an hour of sleep last night, I embrace the absurdity and applaud the folks who first said – hey, why don’t we change the clock every spring? And then again every fall? We are humans. We can do that.