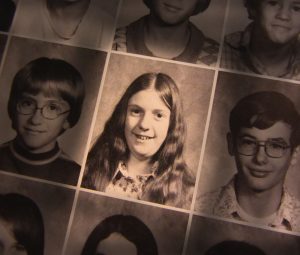 I am looking through my 7th grade yearbook. Back in my day, we called it junior high. That awkward, life-altering time when we were all transitioning from children to teenagers. I have fleeting memories of those days. Sitting in the gym cheering on our basketball team. Playing softball and kickball on the fields outside. I have images in my mind from science class and social studies and math.

I lived in a small town, so I remember most of the classmates I see in these pictures. I attended school with many of them from elementary through our senior year. I keep in touch with several of them to this day. But the person I want to tell you about presided over a room along the long back hall downstairs. My friends and I first had him as a teacher when we were in sixth grade. It was language arts, and it lasted two periods. By a stroke of luck, he was moved up a grade the same year we were, so we had him again in seventh grade. 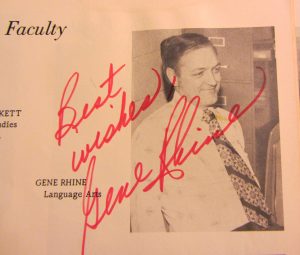 His name was (and still is) Mr. Rhine. Actually, his first name is Gene, but he will forever be Mr. Rhine in my mind. And Mr. Rhine changed my life.

I’m sure we were all a bit gawky and graceless back then, but I was all of that and more. Daunted by the world, simultaneously bossy and intimidated, I had more than my share of the immaturity and insecurities of a 13-year-old girl in a developing body.

My family was relatively poor, so that was an embarrassment to me. (I was 13 after all. Everything was embarrassing.) I was overweight (though I’d kill to be that “fat” again now!) I remember in Sunday School, they’d always have us draw pictures, but I couldn’t draw. I played softball some, but I was definitely not good at it. I made good grades, but I worked for them more out of anxiety than drive. I found my haven in Mr. Rhine’s class.

Mr. Rhine treated us as if we were smart. And in his class, it was fun to be smart. I remember we would play “baseball”, where a “hit” was a right answer. Mr. Rhine had us writing research papers with footnotes and bibliographies in sixth grade. We would head to the library and spend hours looking up information in encyclopedias and resolutely writing it all down. I remember creative writing assignments in which he encouraged us to make up elaborate stories.

To this day, I remember his look of approval when he read something I wrote. Maybe he gave that look to everyone. I hope so. Because that look, that little smile, that pat on the shoulder told me that I had found what I was good at. I believed him, and it transformed me. Not overnight. I still had to make it through junior high. I was still awkward and insecure at times, and still can be! But I had a foundation to rest on, to stand on, to work from. I wasn’t pretty. I couldn’t draw. Or play sports. And I’d never be popular. But I could write. Mr. Rhine said so.

I went on to become an advertising copywriter. Then I wrote scripts for broadcast radio. I’ve written songs all my life, and after three years of effort, I finally completed my first novel. The entire time I was writing it, I thought of handing Mr. Rhine a copy and thanking him for spurring the dream so many years ago. I was afraid he would pass on before I got it written, but I would ask friends back home and they said he was still around.

When I did a book signing at my hometown library a few months ago, I tracked down Mr. Rhine. He was in an assisted living place in the next town over. When I walked into his little apartment, he was sitting in a recliner, covered with a blanket, his tv at full volume. I couldn’t find the right remote to turn it down, and I think I was making him nervous messing with his things. So I shouted at him who I was and why I was there. He didn’t remember me, but I didn’t really expect him to. I shouted that way back in the 70’s, my friends and I were in his class for two years in a row. He joked that we must have gotten tired of him.

No way, Mr. Rhine. You molded us. You inspired us. You challenged us. And I will forever be grateful. I gave him a signed book and told him it was because of him that I had been able to write it. He was touched and thanked me for taking the time. Then I left him, sitting in his chair, covered up to his chin, his tv blaring, holding my book.

I don’t know if he’ll read it. Or if he can. It doesn’t matter. I just wanted to give it to him and to tell him how much his encouragement meant to the timid, anxious, fearful little girl I was way back when. I am so glad I was able to do so.

It doesn’t matter that Mr. Rhine doesn’t remember me. Because I remember him.